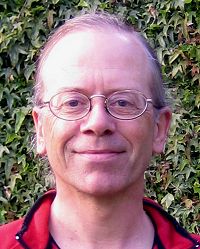 I have been practising Buddhism and meditation for over 30 years and a member of the Triratna Buddhist Order since 1980. Since becoming an Order member, I have worked in a vegetarian cafe in Croydon, helped establish the Bristol Buddhist Centre, of which I was chairman for six years, worked for the Karuna Trust, written a book introducing the fundamentals of Buddhism ‘The Buddhist Path to Awakening’ (published by Windhorse Publications), and taught meditation and Dharma in many parts of the UK, Europe and the USA.

I have been part of the resident / teaching team at Vajraloka since 1995 and became chairman of the centre in 2001. In meditation I have practiced just about everything in the repertoire of the Triratna Buddhist Community and am now particularly inspired by the ‘formless’ or ‘awareness’ approaches arising from just sitting, as well as by devotion to Vajrasattva, Padmasambhava and Vajrayogini, which all finds reflection in my ‘Formless Meditation – Opening to Awareness’ retreats. I’m steadily putting up my writings about meditation and Dharma and other personal news and views on my personal website.