I got involved with Buddhism at the beginning of 1989, attending a beginners meditation course at the Leeds Buddhist Centre. I was immediately struck by the friendliness of the other people and their questioning approach to life; just what is it all about? It was though, when I came on a retreat here at Vajraloka for the first time in 1991 that somehow something in my practice deepened and I realised I could change. It was a real relief and since then Vajraloka has held a special mythic place in my heart. 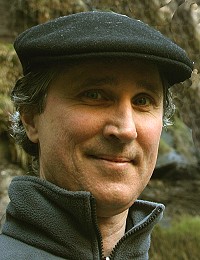 I was ordained into the Triratna Buddhist Order in 1996 and for six years from late 1998 was chairman of the Leeds Centre. I really loved connecting with people, talking about the dharma and seeing the Centre grow. At times I was too busy which affected my health, I stopped being Chairman in 2004 and was not sure what to do though I was certain that I wanted to stay involved in the work of the Triratna Buddhist Community. Shortly after being ordained I had a strong dream in which I was told that after working in Leeds I could go to Vajraloka. When a chance to join the team in 2005 occurred I thought I would go for it. It’s been a good decision.

We have a really friendly community here and there is a growing sense of mutual exploration of meditation, which I value. I really like the local environment and I begin to have a sense of the ground underneath me. Quite a lot of the time it’s a real relief to be living in the countryside, watching the seasons change and being away from the bustle of the city. Slowly it feels my mind has quietened, not quite so caught up with my habitual concerns.

Its great to be involved with the retreats and have new and old friends visit here. It’s a real privilege to be able to watch just what an effect the place has on the people.